Allegra Klein is a violinist, teacher, and arts administrator from New York City. After receiving her Bachelor’s degree in Music from Harvard University, she trained as a Suzuki teacher at the School for Strings in New York and taught Suzuki violin at Queens College's preparatory division.

Ms. Klein has worked for Carnegie Hall, Sony Classical, the Marlboro and Bridgehampton Chamber Music Festivals, and the New York Youth Symphony. Shortly after September 11, 2001, she founded Musicians For Harmony, a nonprofit organization dedicated to promoting peace among nations through music.

As part of this mission, she traveled to Baghdad in 2003 to bring musical instruments and supplies to the Iraqi National Symphony Orchestra, and returned to northern Iraq in 2007 to teach for the first-ever Iraqi Unity Performing Arts Academy. Her articles about these trips were published in Strings and Symphony magazines, and her work has also been profiled in the New York Sun, the New York Daily News, and Chamber Music magazine.

In demand as an arts education and cultural affairs specialist, Ms. Klein spoke at the United Nations in 2006 about the role of the arts in educating girls in developing countries, and was invited back the following spring for a roundtable discussion on how the arts can bridge gaps between cultures. A former member of the American Symphony Orchestra League's Youth Orchestra Division, she has served on panels for the League, the New York City Department of Cultural Affairs, and the Westchester Arts Council. She is currently pursuing a Master's degree in Global Affairs at New York University. 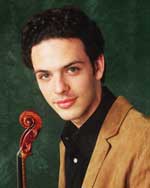 Violinist Colin Jacobsen, recipient of a 2003 Avery Fisher Career Grant, first played to critical acclaim at age fourteen as soloist with the New York Philharmonic under Kurt Masur, and he returned to the Philharmonic more recently to perform Brahms’ Double Concerto with cellist Yo-Yo Ma under David Zinman. Mr. Jacobsen has also been a guest soloist with the symphony orchestras of Albany, Charleston, Charlotte, Eugene and Nashville, as well as Metamorphosen Chamber Orchestra and the Boston Philharmonic. He tours regularly with Yo-Yo Ma’s Silk Road Project and performs frequently with the Chamber Music Society of Lincoln Center and the Metropolitan Museum Artists in Concert. Summer performances have taken him to the Banff Centre for the Arts and the Bravo!, Caramoor Marlboro, Moritzburg, Ravinia and Salzburg Festivals. As the Young Artist in Residence for NPR’s Performance Today, he programmed and played live for listeners across the country and has also been a resident performer on WQXR Radio’s weekly On A-I-R (Artists-in-Radio) Series. Mr. Jacobsen received his Bachelor of Music from The Juilliard School, and his principal teachers include Louise Behrens, Robert Mann, and Vera Beths. 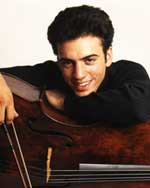 Cellist Eric Jacobsen is a founding member, together with his brother Colin, of the string quartet known as Brooklyn Rider and of The Knights, which performs as a chamber orchestra and in smaller ensembles. He is also the curator and artistic director of the 92nd Street Y’s Makor Center for Classical Café. In the fall of 2003, Mr. Jacobsen appeared with Renée Fleming at the opening of Zankel Hall at Carnegie Hall and on The Late Show with David Letterman, and as a member of the Silk Road Project, he has traveled to Azerbaijan, Japan, Malaysia and Switzerland. Mr. Jacobsen has appeared as soloist with the Greenwich Village Orchestra, Riverside Orchestra, Chamber Soloists of Austin, New Hampshire Music Festival Orchestra, Lake George Chamber Orchestra and Woodstock Festival Orchestra. As a conductor, he led an all-Beethoven program at the Tilles Center in Long Island and the Washington Irving School in Manhattan. Mr. Jacobsen received his Bachelor of Music at The Juilliard School under the guidance of Harvey Shapiro and David Soyer and can be heard on recordings with such distinguished artists as Yo-Yo Ma, Bono, and Mark O’Connor.